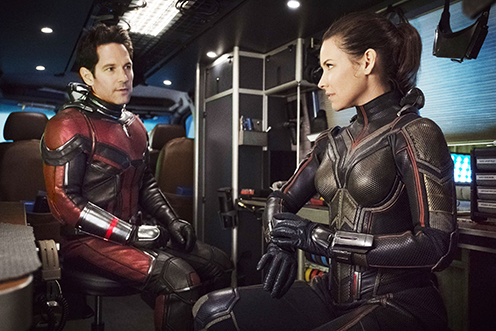 Content: Scott Lang is on house arrest due to his escapade in Germany. Suddenly he has to become Ant-Man again for a rescue mission. Doc Prym and his daughter Hope need Scotts help to secure Janet van Dyne. She's gone lost during a microcosmos experiment long time ago. Scott has got a hint, where she might be because of a mysterious contact with the scientist. Therefore - with the tech from Pyms laboratory - Scott and Hope become Ant-Man and the Wasp once again.

Opinion: The second Ant-Man movie is just more fun than Deadpool 2, aimed to a younger public. There're less violent scenes, rude language or dark events as you got used to watching other Avengers films. Scenes appear at a tearing pace very amusing and well cut. But the music foils it by dowdy orchestra tootling. The story develops slightly dull by following strictly known patterns, much less bold as in "Black Panther".

Conclusion: I wasn't the only one in cinema who found this motion picture hilarious. Ant-Man may be light entertainment, but it's still a well-crafted super hero movie. And there is a little connection to "Avengers Infinity War".