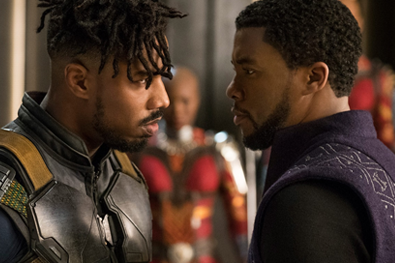 Content: T'Challa is the heir in hidden african kingdom Wakanda. As warrior Black Panther he draws extraordinary agility from a herbal flower brew and is protected by an andvanced body armour. Wakanda's high tech is based on a rare metal that is only found there. It's plugged in machines, gadgets and Black Panther's suit. Gangster Ulysses Klaue has stolen a part of that metal. T'Challa wants to recover it and catches him in South Corea, but Ulysses escapes. Surprisingly an unknown mercenary called Erik Killmonger appears as support. Who is that guy and why does he know a lot about Wakanda?

Opinion: This is the picturization of the 60ies comic from Stan Lee and Jack Kirby. The movie differs from other super hero films as it shows an independent, sovereign society with a well-tempered hero. It's compareable to Wonder Woman, because of a hidden realm both heros hail from. The story is traditionally built up by exposing Black Panther, showing an adventure abroad and finishing with the salvage of his homeland. It's interesting how many exciting and multilayered figures appear, but time is too short to highlight them.

Conclusion: Little rousing Hip-Hop and Wakanda is way too futuristic, but it's an unusual Marvel motion picture that set itself apart from the others.