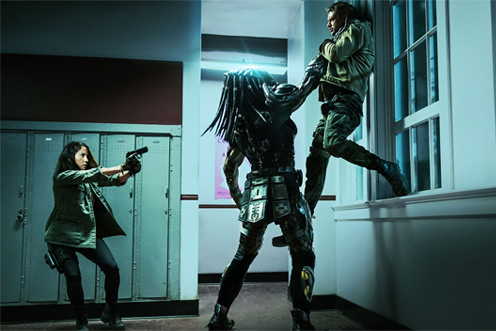 Content: When the most dangerous hunter of the galaxy visits the earth, only a group of distorted ex-soldiers and a grouchy professor can stop him. Sniper Quinn McKenna is on a mission as the Predator spaceship crashes. He manages to take out the crashed with his own weapon. While the miltary examines the site, Quinn is being interrogated. The fractious soldier becomes displaced for his errors without further ado. As he meets a group of soldiers ridden by fears and traumata the predator suddenly appears. The creature wants back its stuff and shows a fierce demeanor. In these situation the men free themselves and start to fight against the alien adversary, together with the scientific professor Casey.

Opinion: Branded by an incredible mazy story, Predator Upgrade convinces in another way. Like fallen out of time, kind of a forgotten 80ies action movie in a modern costume, the music, sounds, quotes, chaotic characters and incidental violence throw you back some 30 years. Moreover, there are surprisingly elaborate stage settings and costly effects.

Conclusion: Predator Upgrade casts out many fans of the more serious precursors. The ones who like splatter comedy on the contrary will be fond. It is swarmed by faults and a simple story, telling no new details of predators, but it's extraordinarily fun!