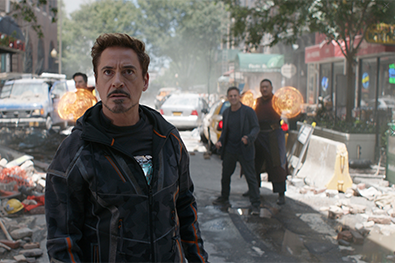 Content: The mighty Thanos has a plan to bring order to the universe. A honorable aim but it's connected to the wish for omnipotence and death of countless individuals. Therefore he needs the infinity gauntlet and six rare gems. One of the stones he believes to be located at the half-god brothers Thor and Loki, others at the earth and different planets. Bruce Banner tells this plan to the superhero team Avengers, but isn't this warning too late? A war begins between Thanos' forces and many heroes including Guardians of the Galaxy.

Opinion: Avengers Infinity War shows an overwhelming number of Marvel heroes. By the implying changes of location the movie becomes dynamic and agile. The characters get enough space to shine but so the length of the film widens enormously. I admire the balance between humour, action and drama. It's hard to enrich such a dark content with funny and interestings encounters. Moreover villain Thanos is convincing, because his motivation and remorse is shown thoroughly. At last the story consternates with a rigorous finish. Cinema visitors getting quite and perplexed - a good sign for a superhero movie.

Conclusion: Aside some minor flaws and faults in visualization this superhero movie is embossed by keen dramaturgy, delightful encounters and humour.