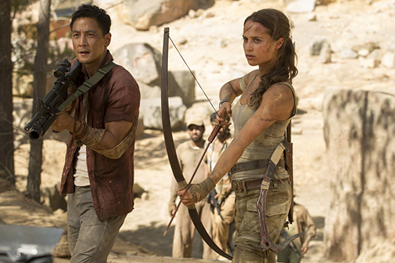 Content: Bike courier Lara is an overall agile and adventurous talent. She copes around with this job in London, while she needn't do that because of her noble descent. In order to gain her family's heritage she would accept her father's death, who is missed for years. As administrator Yaffe hands over an artifact puzzle, Lara notices this is a hint from her father Lord Croft who has been searching for the storied isle of Yamatai where the temple of sun goddess Himiko hides. Lara should burn the notes, but she travels to the japanese sea to search the island by herself. Maybe she discovers what happened to her father.

Opinion: Based on the video game from 2013 the story is told closely to the original script, even with exact reset scenes. Some characters are omitted and a generous introduction shows what the designated tomb raider did in London. Swedish actress Alicia Vikander portrays Lara Croft as a sincere, tenecious and not glamorous person. I like to see her fighting relentlessly instead of all the throwbacks, avoiding confrontations by sneeking around and just rarely using bow and arrow in hopeless situations. The bond to her weapon is stated well.

Conclusion: Following the game so closely is nice an difficult in the same time, because there is little narrative freedom. The liable content fills the film, leaving not much room for new ideas. But gamers will enjoy this raid.