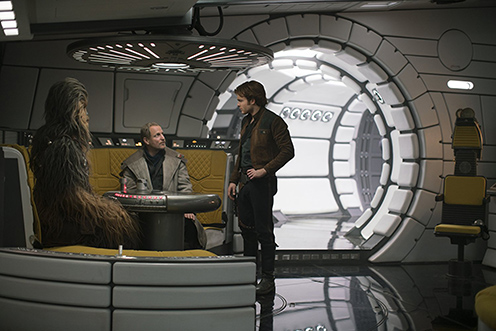 Content: Han and his friend Qui'ra lead a pathetic life on planet Corellian under control of gangster lady Proxima. As they try to escape, Qui'ra gets seperated from Han. Without any chance to find her, Han signs for the Empire to become a pilot. The military is not as the hotspur expected. There are just hopeless battles on the ground and that's not of his taste. Accidentally Han meets a freelancer crew and joins them at once.

Opinion: Solo a Star Wars story differs from episodes 1 to 8 and Rogue One by containing less drama about galaxy reign and light and dark side of the force. Instead it tells an own story. In the center stands the relationship between Han and Qui'ra plus fellow campaigners of the space rogue crew. You'll remember especially droid L3-37, veteran Beckett and of course a certain wookie. The movie stays close to the familiar look. The orchestral soundtrack wasn't messed moreover. Some may miss supernatural elements or unexpected encounters.

Conclusion: Solo is not an extraordinary big hit, but an enjoyable action movie with less pathos and without senseless journeys to some random pleasure planet. It's nice to see, someone realized what worked on Rogue One.