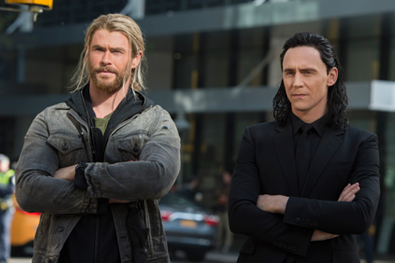 Content: Thor is venturing deep down into the underworld, where he is going to snatch fire giant surtur's crown. As this quest turns out successful he returns to Asgard to present it to Odin. The strange thing is: Gatekeeper Heimdall isn't there and the presumed dead brother Loki is still impersonating Odin. Thor recognizes the betrayal at once and claims to see Odin who is currently in Midgard. The two brothers meet the lord in Norway, where Odin explains that they've got another older sister Hela, the goddess of death. She intends to subdue Asgard and become the ruler of the worlds, but her younger brothers want to butt in here.

Opinion: Third thunder god movie is clearly made for the fans and appears even more similar to Marvel-series "Guardians of the Galaxy". The easily digistible story is told quickly and skimming with attention turned to funny situations, wordplays and encouinters with droll persons and creatures. The better you know the Marvel universe the funnier it becomes. If you're entirely new to the series, it might be harder to understand, but noone will be overstrained.

Conclusion: The story is told in broken bits and the parts could have been connected better to one another, but it's a loony and very funny comic movie. There are plenty of superstars to admire. Dialogues have mostly been improvised. A thing that I like.