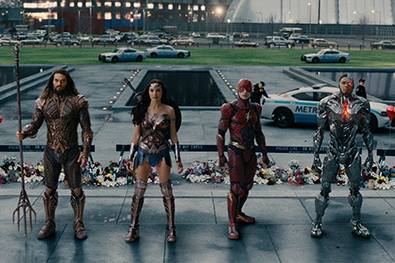 Content: While Batman is looking out for gangsters in Gotham like every evening he notices an insect-like creature - a lead to a new threat. As a precaution he calls for backup. Mostly hidden living Wonderwoman Diana explains that these creatures are henchmen of a destructive force that wants to conquer everything. The so-called "Steppenwolf" needs another three energy-cubes though to unfold inredible power. As Batman likes to illustrate natural boundaries to that meanie, he strives to recruit potent combatants - but they aren't all enthusiastic at once.

Opinion: Besides of a primitive story including a moronic antagonist the story appears entertaining. Here is not the place for chaotic Suicide Squad but the first guard on duty (without Green Lantern and Mera just seen shortly). Heroes get scenes equally to show interesting aspects of their beings and weaknesses. The well-known humour of Joss Whedon is recognizable.

Conclusion: Although Justice League may be the poorest superhero movie of year 2017 it's still enjoyable - especially if you are fond of these guys.