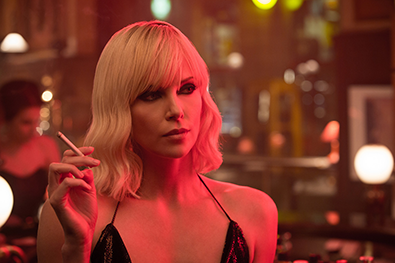 Content: Berlin of 1989 is a dangerous place for undercover agents. Agent James Gascoigne suffers this as he was investigating there. Lorraine Broughton dives deep into the night life of west and eastern Berlin to find out circumstances of his death. Her city contacts are little trustworthy and she has to keep an eye on the East-German police and other agents. Lorraine collects info that the lad called "Spyglass" memorized a mysterious list that could enlargen Cold War if it is published.

Opinion: Atomic Blonde is a rough thriller, skillful highlighted by 80ies music and memorable sounds that point out the cinetic force. Fight scenes are shown relentless, soberly and clearly. Especially emblazed are the interesting characters and the complicated relationships among one another. Historic background and intelligence facts are widely forgone. You would like to know what secret information is written on that mysterious list and the agents' motives. So, the story moves just on the surface of an appealing era and its unstable changings.

Conclusion: I found the movie to be much fun with this neon-nights-mood in a completely dirty Berlin, including fancy music that gives You the goose bumps and there is this refreshing scene with Charlize Theron snuggeling up to Sofia Boutella.