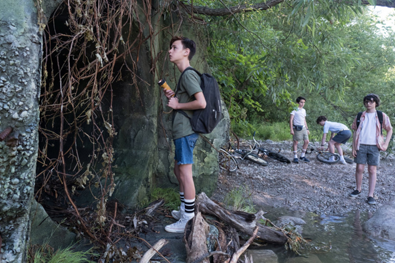 Content: Smalltown Derry in Maine, USA, in year 1988 is a site where many children and adolescents inexplicably dissappear. Their terrible nightmares seem to become reality when they meet a creepy clown who calls himself "Pennywise". The young outsiders Bill, Beverly, Ben, Richie, Mike, Stanley and Eddie decide to look into the incidents.

Opinion: For the usually nerve-racking genre this adaption appears very pleasant to watch with its detailed visualization of the 80ies and many scenes including the loveable loser gang. Some rude violent scenes are topical and haven't been enclosed in that form in the original Stephen King miniseries from 1990. But you might miss some more subtle indications that could sprout a scary atmosphere. Instead you'll get straight shocking effects that sometimes miss the target. Pennywise's background remains unrevealed although you want to know its motives. Maybe it's because of preserving the horror of "It". So it's just a manifestation of fears, nothing more.

Conclusion: In the end a beautiful shot scary movie persists. There is no duty to attend the cinema, but if you do, you might enjoy the cheeky tones of Richie Tozier, portrayed by Finn Wolfhard, who is known from "Stranger Things".