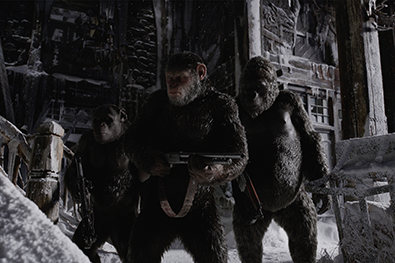 Content: After tyrant ruler Koba was defeated, Caesar dwells with his family and surviving apes hidden behind a waterfall. Human soldiers under command of a fanatic Colonel trace them and pull the tribe into violent conflict. Caesars rage becomes fathomless, thus he is willing to confront the human army. Together with his three fellow confidants Maurice, Rocket and Luca he starts the search.

Opinion: Three minor problems appear - Colonel's motive could have been explained further, the second part of the movie drags on and there are some logic faults within the fights. Besides of these facts director Matt Reeves presents the movie gorgeously, as the viewers of the two prequels expected. High quality level shows during a speedy telling rhythm, very good score and fantastic sounds. You got to smooch the lovely monkey mumblings. The mix of adventure, drama, science fiction and war is appealing and sets itself apart from content of the prequels. Some funny situations are included too. Enthusiasts of the old planet of the apes movies since 1968 featuring Charlton Heston and Linda Harrison will be fond of reminiscences.

Conclusion: You'll definitely side with the apes and recognize the computer generated creatures as main characters. Humans become depersonified except the girl Nova.