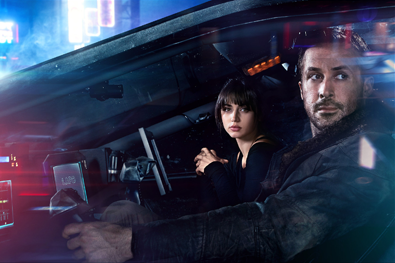 Content: In 2049s Los Angeles artificial created humans (so-called replicants) do their jobs obediently. Only a few of the rebellious generation 8 units exist that caused problems 30 years before. Blade Runner K from LAPD replicant detect hunts the survivors. While on duty he discovers a chest with remains of a long missed woman who died during the birth of her child. Detection of that child becomes top priority for the police and the mysterious replicant corporation of mogul Wallace.

Opinion: The movie ties the story to the science fiction power from 1982. Watchers get abducted for nearly three hours into an even darker dystopia. There is no vegetation, war has radiated parts of the metropolis and it's constantly raining or even snowing. The demure story seems even darker than before, accompanied by occasional ambient sounds typical for Blade Runner. While many characters appear cool or jaded, K's girlfriend Joi glows bright like a hopeful torch. Known figures take the stage and play to the gallery admirably. Goose skin for sure!

Conclusion: Nearly a perfect sequel. There are just some lenghts and the film relates to much on well-tried structures. Each scene delivers a new or old sci-fi invention. It's a criminal thriller in the end, including detective research. Numberless reminiscences from kitchen tiles, quotations to camera perspectives appear. Well, it's hard to treat a worthy successor to my favourite movie, but there you are.