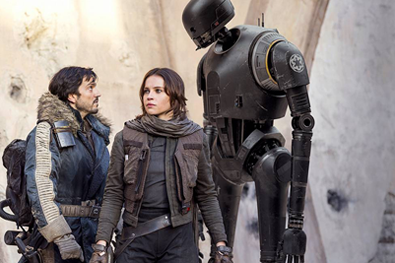 Content: Gifted engeneer Galen Erso who has hidden on a far out planet with his family is discovered by the empire and recruted to help constructing a planet destroyer. Years later, his daughter Jyn joins the rebel alliance in turbulent circumstances. The alliance has noticed rumours of the planet destroyer's construction and tries to secure the plans.

Opinion: During the first half hour much content and a lot of characters is presented. This is a little hard to apprehend. Star Wars adepts recognize many small inconsistencies especially in connection to the other movies, but they might be explainable and don't weigh to much. The story is simple, though it's woven meticilously and put dramatically into the known saga. Famous characters, befitting costumes, weapons and technologies let fans feel at home. Digital effects appear classic. They aren't included just for the sake of convenience, sometimes even understated. Actors don't have that much time to introduce their characters properly, but Felicity Jones fits her role very well. At last "Rogue One" delivers well done additional content to the universe.

Conclusion: An additional perspective is subjoined to Star Wars here. You should overlook the many little faults as long as the experience is so much fun. It's interesting how expendable Jedi Knights, Ewoks and Gungans are.