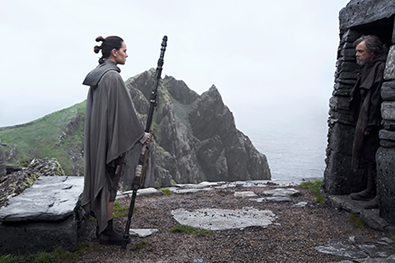 Content: The rebellious opposition wages an acrimonious war against the First Order that traces and attacks one hideout after another. Although the rebels under command of Leia and Admiral Akbar are occosionally successful, it looks as if their going to loose. In the meantime Rey asks Jedi master Luke to be trained, but he has sworn off the force and doesn't want to interfere with others' concerns. Former stormtrooper Finn has recovered and tries to look for Rey, but is stopped by repairwoman Rose, who admires him as a hero. Together they start looking for an code-hacker, who could bring them on a hostile ship.

Opinion: Episode eight seems familiar, somehow like "Empire strikes back". The movie starts rapidly, then there are quieter passages in the middle and unexpected surprises to the end. Some implausible events occur during the space fights and antagonist Kylo Ren is portrayed kind of miserably, though with much effort towards his cleavage. The heroes appear bright and likeable against the dark force. Music fits perfectly to the scenes and touches older themes timely, for example during flights of the "Millennium Falcon".